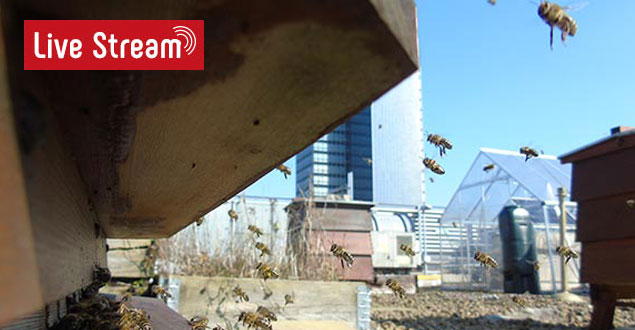 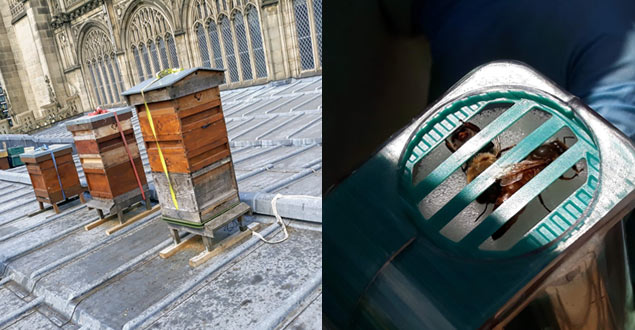 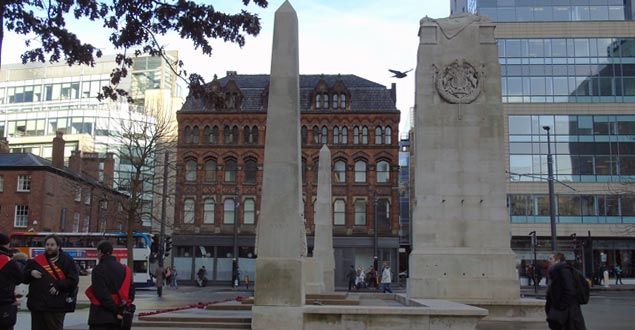 A Short History of the Area
Words by Benjamin Francis Cassidy.
Photographs by Amy Burrell.

A cenotaph is a tomb that holds no remains of a person. Instead, it celebrates all whose remains were either never retrieved, or, are elsewhere. Due to the nature of war this is a common occurrence. A monument to the dead, the empty space within is perhaps best viewed as a metaphor for loss itself, and the feelings that come with grief.

Manchester’s city centre’s central war memorial (the focal point of services each Remembrance Day as well as other events and ceremonies) was unveiled in 1924, a full ten years after the outbreak of WW1. This was due to indecision on the chosen location and the time taken to secure funding. Other potential areas of conflict included the fact that a cross already existed there, as a marker of St Peter’s Church (this cross still stands on the opposite side of the tram tracks to the Cenotaph – the former site of the memorial), demolished in 1907. The location was finalised, eventually. Work began in 1922. The design was by architect Sir Edwin Lutyens, renowned for other designs that still stand today, including Westminster’s Whitehall Cenotaph.

Due to the expansion of Manchester’s still growing Metrolink network, it was agreed that the monument would be dismantled and re-located from its spot opposite Manchester’s iconic Midland Hotel. This fuelled much interest, as many Mancunians, who previously had little awareness of their cenotaph, suddenly became alert, when they saw it coming down. Though some may have preferred it where it was, the current site is more spacious, meaning the area now allows for larger groups to congregate, when it’s used for public gatherings. 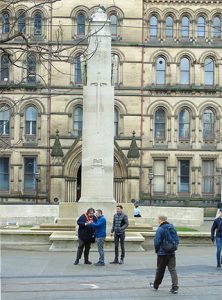 Located in a busy spot, the area is a central hub for tourism and local interest. Many people, from other towns, cities and even countries pass by, and express interest. Some stop to pay their respects or leave tributes, often in the form of flowers; others have a historical interest and are keen to discover details about it, including the role it plays today and the significance it still holds. This is partly due to the events that have taken place in and around St Peter’s Square – in particular, the Peterloo Massacre of 1819.

One of the darker and sadder moments in Manchester’s well-documented political history came in 1819, on 16th August. Political tensions were high, for many reasons, and a large group of the public met, to peacefully protest. What followed became and is now known as The Peterloo Massacre. Innocent people were killed, and the incident caused shockwaves throughout the region, the country and the world. Further, detailed historical accounts and associated articles can be found within and through the Central Library services.

Recently, interest was further revived by the 2018 film, Peterloo, the cast of which included local actress, Maxine Peake. Awareness of such things also helps Volition volunteers learn more about the City many call their home. This year sees the 2ooth anniversary of the event, and, will be marked by a varied programme of activities, that will see great numbers flock to the site. Volition will be on hand to help, as always.

Those who want to be a part of the volunteering programme for Volition’s Cenotaph Project have many opportunities. One important skill is a chance to increase their communication abilities, by approaching and talking to members of the public. As well as being a valuable attribute for employability, regular attendance has helped many to re-discover a sense of purpose and allowed them to realise that it’s possible to contribute to the community, at the same time as gaining experience that can help get them work orientated. Satisfaction within the role is always an aim that Volition wishes to attain for those involved.

Andy is the Co-ordinator of the Volition’s Cenotaph Project. His role involves working alongside volunteers, helping to train and coach them to be able to help members of the public with queries, such as directions around the city. He provides volunteers with all they need: weather-appropriate clothing, a sash that lets people know who they are working with, and leaflets and foldout maps.
It was during Andy’s time as an attendee on the ten-week programme that his current position as Cenotaph Project Leader emerged. He had been made redundant and came to Volition for help with his CV and support in returning to work. Following the course, he continued volunteering and this eventually led to him being offered the role. Andy loves what he does, takes pride in it and helps inspire new volunteers, at the start of their journey.
Kirsty’s Story

Kirsty has been completing Volition’s ten-week programme and during that time has regularly attended the Cenotaph Project, working alongside Andy. In the short time she’s been volunteering it has given her the boost to apply for jobs. She’s secured interviews within the catering sector, and a maintenance position at Manchester Airport. She stated that:

Having a regular slot, each Tuesday, has helped me to get some structure into my week. Talking to people I’ve never met is challenging. However, persevering has meant I’ve gained confidence, from meeting people. Approaching members of the public and engaging with them has built certain skills that hopefully I can use in a job role. I think doing this will also mean that during my interviews I’ll have some experience to talk about.

This shows how quickly people can begin to turn around their lives and break destructive patterns that often arise from unemployment. A lack of belief can become deep-set and lead to damaging emotional and mental-health. That’s where Volition can be an important point between unemployment and employment – a safe and welcoming environment that allows people to go at a pace suitable for their individual circumstances.

Come and See for Yourself

Along with other projects, Volition’s Cenotaph Project provides a valuable service for the public, as well as helping volunteers to empower themselves, and stay in a healthy mind-set. They get to meet and interact with a diverse range of people, and, are regularly reminded just how much of a modern, international city Manchester is. The history of the area, combined with recent investment (the extensively modernised and renovated Central Reference Library, as well as the new office spaces, cafes and restaurants that have sprung up in the vicinity) continues to maintain its status as a bustling space, that brings crowds, regularly. Those who come, for whatever reason, can count on a professional, friendly greeting from a Volition Ambassador. If you find yourself in the area, and have a few minutes to spare, please feel free to stop by. Someone will be on hand, Monday to Friday. The Cenotaph is staffed from 11.00am until 12.30pm, and 12.30pm to 2.00pm, as well as during special events.